The Real-World Consequences of Fake News and False Allegations 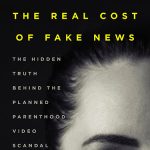 Three years ago, in the dark of night, we drove away with two sleeping babies from our home for the very last time. Our vehicles were sandwiched between armed security as we escaped the only life we knew, and one we loved. Survival mode became a way of life for me and my family.

The headlines from that time have passed but the memory remains. The wider impact on families, communities, and individuals has been residual but, for those of us caught in the maelstrom, it is anything but ephemeral. I am the embodiment of what happens when we don’t value truth, fact, and science. When we allow “fake news” to perpetuate.

Three years have passed but the harm persists. I believe in a meaningful exchange of ideas — ideas which are based on fact and science. I believe there must be a way to bridge the ever-increasing divide between the polarized sides of our belief systems, one that does not subject individuals and their families to displacement, doxing, and death threats. I believe in protesting causes, not individuals. I also believe in a meaningful existence. By sharing my story I hope to encourage dialogue instead of divisive rhetoric, to put a face to the damage done, and in doing so encourage others to think critically about institutions and systems.