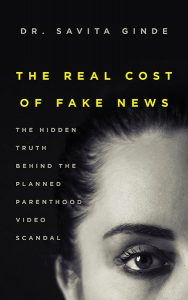 A book for our times, chronicling the truth—and consequences—behind the Planned Parenthood Video scandal.

Dr. Ginde never wanted to be famous, but in 2015 her anonymity was snatched from her by an unscrupulous organization calling itself “the Center for Medical Progress” (CMP). Members of CMP used subterfuge to gain access to the offices and medical facilities of Planned Parenthood of the Rocky Mountains, where Savita worked as Medical Director. After penetrating both the national office and many local Planned Parenthood organizations, these undercover and dishonorable CMP agents took surreptitious video of meetings and medical procedures, which they subsequently edited (even dubbing in their own audio!) to make it appear that Planned Parenthood was engaged in the sale of fetal tissue and body parts from human fetuses.  Fake news at its best.

The consequences for Savita were horrific. First came the hateful e-mails. Then horribly unfounded phone calls.

Then the death threats.

To ensure her safety—and the safety of her two small children—Savita and her husband were forced to flee their home and live in hiding. Incredibly, amid these security concerns, she was called to appear before Congress to answer questions about the content of CMP’s fictional videos.

In this book Savita Ginde sets the record straight about her life and her work. The dedicated physician and mother of two presents her side of 2015’s most shocking story, explains why she’s proud of the work she does, and offers her thoughts on how America should approach the debates about abortion and healthcare in general as we go forward.

Get your copy now, on any of these platforms.